for mixed choir and percussion

The First Tears is based on an Inuit folk tale. The music is a timeless, primeval soundscape, where echoing vocal lines create a sense of eternal space. It is scored for mixed choir, drum, campanelli, jaw harps, and whistles. There is a great deal of word painting that helps the listener envisage the events of the tale: an enormous whale body is described for the first time with a tremendous surge in sound; the whale’s ribs rising up around the Raven like huge ivory columns are depicted by the male voices singing solid blocks of chords while the female voices narrate the story. A sudden blossoming of sound is heard when the Raven sees mysterious light inside the whale. And, of course, the beating of the drum is there too — all adding to the images and sounds present in this tale. While both male and female voices take turns to unfold the story, the sad ending is narrated, without words, by the plaintive sound of a recorder, with an occasional exclamation from a jaw harp. 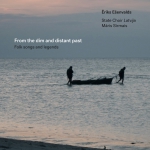 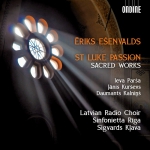 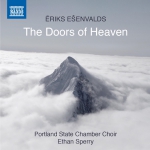 The First Tears (2014) is in effect a miniature cantata, based on an Inuit folk tale. It is shamanistic in tone, as befits the nature of the text, dealing with the moments after the creation of the world by the Raven; the composer not only makes wonderfully atmospheric use of the choir to create appropriate soundscapes but also employs a drum and other percussion instruments, a Jew’s harp and a solo recorder to huge colouristic effect. (Ivan Moody)

A heart‑stoppingly beautiful piece by Ēriks Ešenvalds called The First Tears which takes an Inuit legend of what happened just after Creation as its subject. (James Jolly)