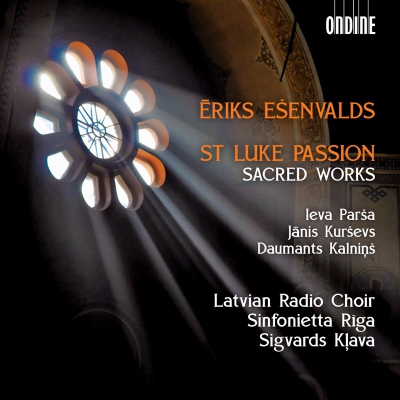 The title piece of the recording is a 30-minute Passion according to St Luke, a work in eight movements completed by the composer in 2014. The work holds a special place in the composer’s repertoire as the first Passion by the celebrated composer of several choral works. The music is sumptuous, rich, and powerful, with heroic, picturesque, passionate, and ethereal elements. A Drop in The Ocean (2006) is an impressive vocal work dedicated to Mother Teresa while The First Tears (2014) is based on an Inuit legend. Litany of the Heavens (2011) is a mysterious and magical work based on a religious poem by Fricis Bārda.

‘It’s an unusual and highly effective beginning, and I can say that it is unlike any other setting of the Passion with which I am familiar… One could hardly ask for better performers in this repertoire… A superb release.’ (Ivan Moody)

‘This is an exceptional recording of exceptional music. Latvian composer Ēriks Ešenvalds is steadily building a considerable reputation for himself… A CD not to be missed.’ (Philip Reed)

‘The Latvian Radio Choir and the Sinfonietta Riga, performing impeccably under Klava, are perfectly suited to Ešenvalds’s distinctly personal vision of the divine.’ (Joshua Rosenblum)

‘It confirms Ēriks Ešenvalds as a leading light in contemporary choral music. His compositions are tremendously imaginative and effective; I found my attention gripped by all the pieces on this disc.’ MusicWeb International (John Quinn)