The Doors of Heaven 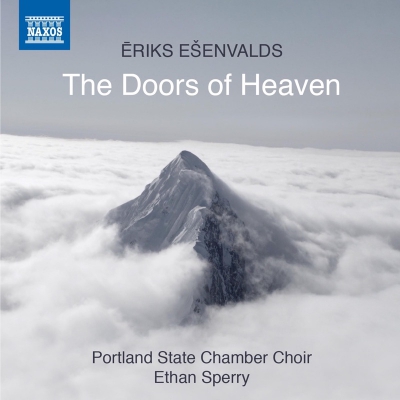 ‘Ešenvalds’ colorful, dramatic and multi-voiced works on the album reveal skillfully set narrative texts ranging from folk material to liturgical. An important new recording of works by a rising star in choral composition and a top-notch chorus and I am pleased to recommend it enthusiastically.’ — Morten Lauridsen

The Latvian composer Ēriks Ešenvalds has rapidly become one of the world’s most performed choral composers. His ability to bring a dramatic text to life through textures that are lush yet permeated with a more stringent and angular aesthetic has ensured a steady stream of commissions from leading orchestras and choral forces.

The four works on the album reflect an interest in the beauty of nature, religious faith and legend. The First Tears is based on the Inuit legend of the Raven and the Whale, a story of how grief came into the world. Passion and Resurrection is a profound and powerful exploration of Christ’s death and resurrection constructed from a variety of liturgical sources.

Led by Ethan Sperry, Portland State Chamber Choir has recorded the music of Margaret Garwood, Veljo Tormis and Morten Lauridsen. Their album A Drop in the Ocean was a finalist for the 2012 American Prize in Choral Music and the 2014 release Into Unknown Worlds was named a “record to die for” by Stereophile. The Choir has performed and competed in venues across the US and around the world.

‘Ešenvalds’ music is given a splendidly evocative and heartfelt performance by this clearly very fine American choir, who seem alive to the music’s colours, directness and beauty.’ (Ivan Moody)

‘A heart‑stoppingly beautiful piece by Ēriks Ešenvalds called The First Tears which takes an Inuit legend of what happened just after Creation as its subject. Wonderful performances by the Portland State Chamber Choir.’ (James Jolly)

‘Latvian composer Ēriks Ešenvalds is now thoroughly established as one of the world’s leading writers of choral music. This disc makes an excellent introduction for anyone wanting to investigate Ēriks Ešenvalds’s soundworld.’ (Philip Reed)

‘This is a super disc. All the music is compelling and the work of a composer who really knows how to exploit the sound of a choir to the full and in most imaginative but not outlandish ways. Anyone wanting to explore the extraordinary music of Ēriks Ešenvalds could start here with confidence.’ MusicWeb International (John Quinn)

‘Latvian composer Eriks Ešenvalds has been making quite a name for himself in choral music. He teeters gingerly between consonance and dissonance, and varies intimate whisperings, the strength of forces—sometimes a solo soprano over the chorus; sometimes a solo vocal quartet; sometimes exquisite, silky smooth legato singing by the entire chorus—with wise, spare use of instruments.’ Stereophile (Robert Levine)

‘Ešenvalds’ is centered in an environment … in which music is text and text is music. Where many of today’s composers use techniques such as dissonance, clusters, and non-vocal sounds as mere effects or expressive “flavoring”, Ešenvalds employs such devices—along with traditional melodic and harmonic structures—as carefully thought out realizations of the dramatic elements inherent in the text.’ ClassicsToday.com (David Vernier)