for mixed choir, instruments played by the choristers, and prepared grand piano

Seneca’s Zodiac, commissioned in 2011 by Philadelphia-based virtuosos The Crossing for their Seneca Sounds project (to which I also contributed) again includes an array of non-vocal sound-sources — tuned glasses, Tibetan bowls, a rain stick, a bass drum, combs and paper and a prepared piano. Instruments and voices (who also whistle and audibly breathe) meld into one, creating a soundworld of compelling otherness. The result is at once primordial and modern, spiritual and scientific: the twelve constellations collapsing into the sea described by Seneca in his tragedy Thyestes are given a set of pitches based on the positions of their stars. These are traced in the score for the performers to see, but also traced by a prepared piano for listeners to hear. After a hair-raising opening telling of the coming end of the world, the evocations of each constellation are richly characterised as a mysterious ritual that subsides into stillness and exhalation for the fall of the Fish, “last of the stars of heaven”. 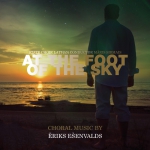