for choir and percussion

My Thoughts (‘Мысли мои’) (2019) is a setting of the preface of Saint Silouan the Athonite’s treatise My Soul is Crying to the Whole World. While the book itself is a collection of sayings, prayers and beliefs, the preface concerns the struggle of attempting to take divine perfection and write it down in words. Saint Silouan believed his thoughts came to him in perfect form from God, but the act of translating these divine ideas into human language made them human, and thus imperfect. Saint Silouan apologised to his readers for the imperfections of his work. The piece begins with a three minute highly static section for the lower voices of the choir: the altos are divided into three parts alternating their singing with the tenors and basses in four parts. The sopranos enter alone, singing two separate themes that are each repeated in sequence through multiple keys, attempting to find home. The piece builds to crisis, a rare cadence to a pure minor chord, as the attempt to capture the divine has failed. And then, only after the failure, true inspiration arrives softly. Starting with just the soprano and alto voices, the choir’s texture peacefully expands to a final chord that covers over four octaves, from the lowest bass note to the highest soprano descant. 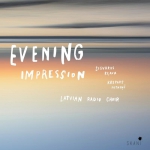 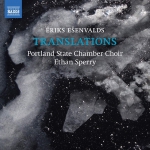