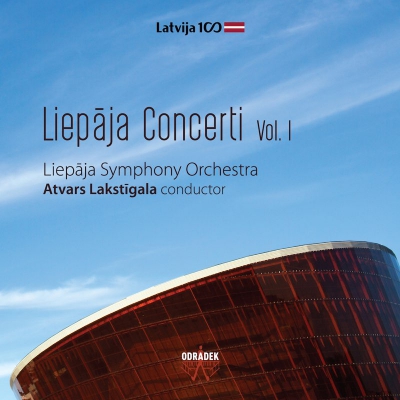 Ēriks Ešenvalds is much more of a known quantity due largely to regular releases of his choral music on Hyperion, Naxos and Ondine, among other labels. In fact this very performance of his clarinet concerto Visions of Arctic Night has been previously issued by Odradek in a collection called Kurland Sounds (together with works by Šmīdbergs and Vasks — ODRCD319 - review). One assumes it is included here for the convenience of collectors seeking the complete set of these Liepāja Concerti — presumably more volumes are planned. Either way the subtitle of Ešenvalds’ piece implies that the Nordic night sky is the natural phenomenon playing upon the composer’s inspiration in this instance. It begins with an almost jaunty, folk-like tune for the clarinet with lively orchestral accompaniment. Again there are novel effects in brass and percussion. The statements of the main element of the theme are subjected to mysterious echoes. In fact this device evokes limitless space, a sense reinforced by the extraordinary atmospherics that follow. Ešenvalds here fashions a quite magical evocation of sky, one quite unencumbered by cliché, and while the listener attempts to make some sense of these sounds, a big orchestral climax leads to curious electronic effects which act as a bridge to the beautiful theme of the slow movement. The brilliant clarinettist Ints Dālderis projects strange whisperings and flutterings which are accompanied by a gentle piano commentary and an omnipresent electronic halo — magical episodes like this act to remind this listener why one bothers to listen to new music in the first place. One imagines lying flat on one’s back in an Orkney field devoid of natural light, after the solstice, staring at the heavens. The shimmering yet pellucid writing for both soloist and orchestra is perfectly natural and completely miraculous. This Espressivo - misterioso slow movement is a stunning achievement by any standards. It’s also difficult to follow. The finale is marked Maestoso-Grave-Limpido; its truly majestic opening soon gives way to gently pulsing, veiled textures, again seemingly underpinned by a synthetic sounding haze. Roughly halfway through the jaunty material from the opening re-emerges and triggers the pulling together of threads from the rest of the work, but not before a final contemplation of the celestial vistas. Ints Dālderis’ performance is thrilling throughout and more than matched by the heartfelt response of the Liepāja orchestra and its fastidious conductor Atvars Lakstīgala. I have been repeatedly touched by the sonic imagination of this composer, which is apparent in so much of his choral output. However, with Visions of Arctic Nights I suspect Ešenvalds has reached another level. It is a magnificent achievement and more than worth the price of this set in its own right. (Richard Hanlon, MusicWeb International)